Guest Market Report: Will it stay or Will it go?

As everything from airline tickets to used cars, fresh fruit and lumber has gotten more expensive over the past several months, policymakers in Washington have repeatedly described the pop in prices as “transitory.” That word is losing its traction.

Inflation is running at a 13-year high, according to the latest stats published yesterday. While the Biden administration continues to say that price increases are temporary, many inside the White House now believe that high inflation could be with us for a year or two. That is not, well, transitory, unless you are talking about a long trip. 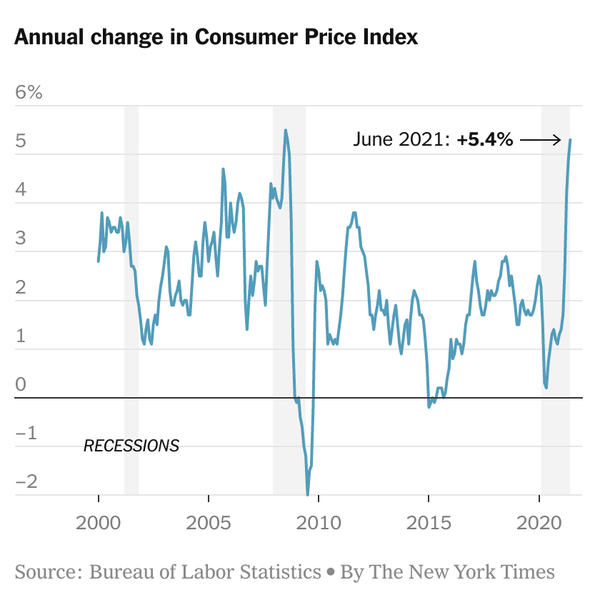 Jay Powell, the Fed chair, is scheduled to testify in the House today and the Senate tomorrow. Should he call inflation transitory, expect blowback. Maybe he could try “persistently impermanent” or “enduringly ephemeral” instead.

Corporate executives are preparing for a longer spell of inflation. Jamie Dimon of JPMorgan Chase told analysts on the bank’s earnings call yesterday that inflation was “a little worse than the Fed thinks.” On PepsiCo’s call, Hugh Johnston, the company’s C.F.O., said the food and beverage giant was likely to raise prices soon. “Is there somewhat more inflationary pressures out there? There is,” he said. “Are we going to be pricing to deal with it? We certainly are.”

Inflation has long been seen as the economic villain. That view is changing. For those who worry about growing inequality, inflation might actually be a salve, up to a point. A 2014 study of developed economies found that as inflation rose, income inequality tended to shrink. Inflation could be as high as 13 percent, the research found, and still act as an equalizer, shifting the benefits of economic growth toward lower-income individuals.

Wages often rise with prices, as they have in recent months. What doesn’t rise with inflation are college loans and other debt. Reducing the burden of debt with higher incomes could help improve many Americans’ finances.

Now might be a good time for modestly higher inflation, said the Harvard economist Ken Rogoff, who called for higher inflation to reset the economy after the housing bubble burst. You should think of inflation like the weather, he told DealBook. If it hasn’t rained for a long time, a major downpour is probably not a worry. A little bit of singing in the rain might be warranted.