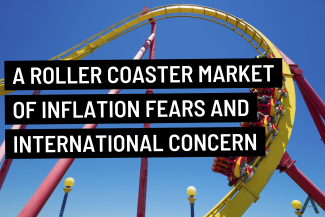 A Roller Coaster Market of Inflation Fears and International Concern

As we entered the final months of trading for last year, we asked the question, “Have we seen the market highs for the year?”  Our estimation at the time was, “We are going to lean to an answer of … yes.”  The markets did find new highs. See our comment here: www.affinity-cap.com/blog-01/two-questions-about-market-today

The following month we stated, “We are pleasantly surprised by the strength of the stock market and have maintained our portfolio allocations to participate in these gains even though we have numerous concerns that we highlighted last month.” We explained our belief that companies buying their own stock in huge quantities was artificially propping up the markets: www.affinity-cap.com/blog-01/newtons-laws-motion-rising-markets-share-buybacks-0

We also said that we believe that inflation and rising interest rates are the primary issues on which the markets will focus.

We also asked the question, “are we facing a long list of worry or opportunity?” First, we believe part of our job is to worry for you so you can sleep better at night. We are always concerned about what might affect your portfolios and then try to minimize those concerns. In the short term, we do see challenges that should be monitored. As for opportunities, they may be more difficult to realize going forward. As of today, we believe that the markets will be challenging through the mid-term elections on November 8, 2022.

We were in fact correct in our beliefs at the end of last year, just a bit early in our call.

One of our key concerns for over a year has been inflation and rising interest rates. We add a current concern of the situation with Russia and Ukraine as well as the opportunity China may exploit regarding Taiwan.

There are two key barometers which Wall Street investors monitor closely. One is the yield on the 10-year Treasury note. The 10-year Treasury note is a debt obligation -think of a bond or a certificate of deposit - issued by the United States government with a maturity of 10 years. It pays interest at a fixed rate or yield.

The 10 Year yield started in January at 1.52%. Last week it had spiked to 1.87%. While the numbers may appear small, that is an increase of 22% in just a few weeks and the expectation is that it may go higher. This is confirmation of inflation fears that we all see each day in the prices of gas, food and most everything consumers and businesses purchase. A little inflation means a growing economy, an elevated level of sustained inflation equals a host of problems for our economy. Right now, it is the fear of future uncontrolled inflation that is so concerning to the markets.

The second key barometer of inflation and rising interest rates is The Federal Open Market Committee or the FOMC. This is the branch of the Federal Reserve System whose mission is to promote stable prices and economic growth. Simply put, the FOMC manages the nation's money. The twelve members of the FOMC meet eight times a year to discuss whether there should be any changes to near-term monetary policy.

As their mission to promote stable prices involves fighting inflation, their actions are closely monitored by the markets. It is forecasted that the FOMC members may vote to raise rates as many as three times this year in an effort to slow the rate of inflation.

Russia and Ukraine / China and Taiwan

Mixed signals abound within the question of whether Russia will make advances on Ukraine. In 2014, Russia moved into parts of Ukraine and still maintains control of key areas. Russia sees Ukraine and all the satellite countries of the former USSR as traditional and historic pieces of their homeland. Russia fears that Ukraine or other bordering countries may be invited to join The North Atlantic Treaty Organization, NATO, which has agreements to defend any member countries against aggression.

Russia has vast energy, mining, and agricultural resources. Disruption of these industries through further sanctions or military conflict would have serious repercussions for world markets.

At the same time, China has increased their verbal rhetoric and their military activities around Taiwan. The question of Taiwan’s sovereignty from China dates to 1949 although it is a long and complicated history. Taiwan is a rare case in which Washington has a security partnership with an entity with which it does not have diplomatic relations.

Our response for much of the past year regarding inflation and economic concerns has been to lean towards value versus growth and focus on traditional guards against inflation such as financials, interest-rate hedged bond funds, a REIT fund, or Real Estate Investment Trust, and energy. We also have an allocation to Treasury Inflation-Protected Bonds although this is an investment in which the name implies an obvious solution to rising rates, but the mechanics of these securities are a bit more complicated and require close monitoring.

Here in 2022, we have sold our international fund, sold our remaining position in small cap growth as well as our Nasdaq mid-cap fund and maintained a higher level of cash that will serve us well if this market volatility continues. We added to our technology heavy Nasdaq position as it weakens and may add more if it falls to another key support level.

In our evaluation of the more technical aspects of the buying and selling in the markets, we see some key breakdowns in numerous areas. While we could see buyers come into this market looking for bargain days, we remain cautious and watchful.