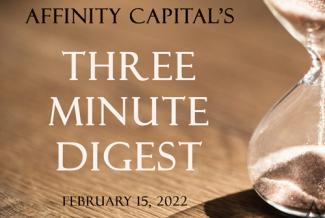 The markets continue to be concerned about rising US consumer costs and escalating tensions between Russia and Ukraine. Our thoughts lean towards Vladimir Putin playing high stakes hardball to position himself on a number of geopolitical issues with the West. There is a crippling economic downside for Russia from an invasion although China is more than willing to step in and fill the void if needed.

A decline in COVID-19 cases across the US prompted officials to relax some restrictions.

Three Thoughts for the Markets

Crude oil is approaching $95 per barrel and the psychological impact should it surge to $100 could be significant for the markets and our economy.

We are at point of maximum uncertainty for the Russia / Ukraine crisis. Vladimir Putin may sense weakness in the NATO / Western allies’ options to respond and at 70 years of age, he may see this as his best opportunity to cement his legacy of Russian dominance over the former USSR satellite nations. The main stated goal of deterring Ukraine from joining NATO has perhaps already been met although Putin is looking for a permanent declaration from NATO preventing Ukrainian membership.

The Nord Stream II pipeline is a key bargaining chip in this dispute. It is a new 745-mile gas pipeline running from western Russia to north-eastern Germany under the Baltic Sea. It follows the exact same route as Nord Stream 1 which was completed in 2012. It is designed to double the amount of natural gas flowing from Russia straight to Germany. Its owner is the Russian state-controlled gas firm Gazprom.

The consensus on Wall Street sees the Federal Reserve raising interest rates as many as seven times this year. Historically, rate changes are at 0.25% intervals. It is possible the March meeting may see a 0.50% hike and the market reaction to that is certainly to be determined.

The Federal Reserve or “Fed” through the FOMC, Federal Open Markets Committee set the Federal Funds Rate. This is the interest rate that banks charge each other to borrow or lend excess reserves overnight. Banks are required to maintain a certain ration of funds relative to their daily deposits. If a bank is under this level on any day, they borrow money from each to meet the required levels.

While it may not seem like an overnight interest rate between banks would affect each of us – this rate is an important benchmark for most other interest rates in our economy.

The protest began with the introduction of a new rule that all truckers must be vaccinated to cross the US-Canada border, but the protests have morphed into broader challenges to Covid health restrictions and the Canadian government in general. Truckers have gridlocked the area around their Parliament in the Canadian Capital of Ottawa.