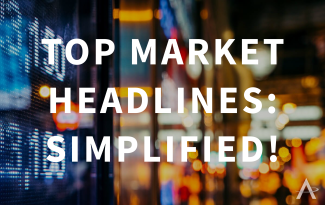 There have recently been several stories affecting the markets, so we thought we would simplify some of the issues for you.  While these may not be the biggest headlines in the news, they are market oriented and therefore affect our portfolios.

Last month, the Chinese government unveiled a five-year plan outlining tighter regulation of Chinese commerce.  It appears that every aspect of Chinese business and perhaps culture will be scrutinized in the world's second largest economy.

The plan will address monopolies and "foreign-related rule of law", each aspect of the technology sector, music licensing deals, and even scrutiny of after-school tuition services offered by individual teachers.

As part of China’s regulatory tightening of debt levels and speculation in real estate, China Evergrande Group, which epitomizes the borrow-to-build business model and was once China's top-selling developer, has missed two debt payments.  Worldwide markets are left to speculate whether this is the first of many dominos to fall in the Chinese markets.

Although American companies have exposure to the Chinese, Affinity Capital does not have any direct exposure to Chinese securities.

The debt limit that is being discussed so frequently is the total amount of money that the United States government is authorized to borrow to meet its existing legal obligations, including Social Security and Medicare benefits, military salaries, interest on the national debt and tax refunds, among other payments.

This does not include the current two spending bills being negotiated of $1 trillion and $4.5 trillion dollars, adding to future debt, and of necessitating another debt limit hike in the future.

Failing to increase the debt limit would cause the government to default on its “current” legal obligations which is an unprecedented event in American history and unlikely to happen. Congress has never failed to raise a debt limit.  We highlight the term “current” because this is often confused with spending bills going forward in which political negotiations can result in a government shutdown.

The federal government’s fiscal calendar runs from Oct. 1 to Sept. 30, meaning a shutdown will occur if lawmakers do not pass a 2021-2022 budget by the end of this month.  There have been 21 shutdowns with most lasting days and the longest lasting 21 days in 1995.

Mandatory spending for entitlement programs like Social Security, Medicare, and Medicaid, are not subject to annual appropriations so they are not affected, although the administration of these programs can be affected by staffing furloughs.

What is the Federal Reserve “Tapering”?

In response to the market disruptions caused by COVID, the federal reserve began purchasing almost $80 billion of Treasury securities and $40 billion of agency mortgage-backed securities (MBS) each month.  The purchase of such large amount of bonds reduces the supply and the demand from private investors increases which cause the prices to rise.  Supply & Demand!  This also pushes interest rates down which promotes growth in the economy.

As the economy strengthens, Fed officials began talking about “tapering” their purchase of bonds in the open market.  This simply means a gradual slowing of their purchases rather than an immediate stop, which would be a shock to the financial system.

As the Fed looks to taper their bond purchases, this indicates a growing economy, and a byproduct of a growing economy is inflation.  One of the key elements of the federal reserve’s mission is to fight inflation.  The evidence of inflation in our everyday lives is quite clear in our daily trips to grocery stores, restaurants, and gas stations.

A little inflation is good, a lot is bad.  A tool that the Fed possesses to fight inflation is adjusting the short- term federal funds rate.  This rate essentially sets the benchmark for rates throughout the economy.  A higher interest rate slows the economy.  Would you rather buy a house with a 3% interest rate or an 8% interest rate?  We have less incentive to spend, and the result is a slower economy.  The goal is to find the economic sweet spot.  We may not buy a home at 8% but we may still buy one at 5 or 6%.

Keep in mind that rising inflation is not necessarily a negative for stocks. The uncertainty of the Goldilocks story is what can rattle the markets – too little, too much or just right.  Over the last year, Affinity Capital has increased our exposure to interest-rate hedged bond funds, financials, and other rising interest rate friendly investments.

We hope this has been an informative look at current situations affecting the markets currently.

As always, please feel fee to reach out to us with any questions or to schedule a visit.  Thank you for the opportunity to serve you.